Storm events in Rhode Island can lead to billions of gallons of stormwater flowing into rivers, tributaries, and Narragansett Bay. While the rain from these storms is not inherently problematic, the stormwater collects debris and materials along its journey including litter, fertilizers, and bacteria from animal and pet waste. These challenges are exacerbated when humans use storm drains to dispose of items such as litter, pet waste, oil, paint, or other hazardous materials. This polluted stormwater makes its way to storm drains, damages the underground stormwater infrastructure, and eventually empties into our waterways.

To address the ongoing challenges that storm drain pollution can have on the environment, SNEP Network Partner, Save The Bay, runs a volunteer program that focuses on marking storm drains to raise awareness of their functionality and importance to clean and healthy watersheds. Storm drain marking has raised awareness and taught valuable lessons about stormwater to the general public. Volunteer groups and local residents have the opportunity to learn about the impacts of stormwater. July Lewis, Volunteer and Internship Manager with Save The Bay, manages the program, including all volunteer registrants, maps, routes, spreadsheets, and tracking of storm drains. Lewis explains that, “Neighbors are often very curious about what storm drain marking volunteers are doing! That is why we provide the volunteers with a Save The Bay shirt and supply tote bag, so they look official. Those inquiring are sometimes surprised to learn that storm drains lead to their local water body, and they are almost always deeply appreciative of the work the volunteers are doing.” Lewis has also mentioned that while Save The Bay has a team of core volunteers that are very knowledgeable about stormwater issues, new volunteers are often eager to learn and happy to spread the word throughout the community.

With the support of the SNEP Network, Save The Bay has expanded the volunteer program and increased messaging around protecting the waterways. Lewis explains “The support of the SNEP [Network] program has been enormously valuable. Previous projects were often small and based on individual volunteer’s interest in marking in their own local streets. Funding to purchase a large number of supplies with different marker designs (including both English and Spanish language markers that read, “Drains to Bay /River/Pond/Coast”) has enabled us to think bigger and set goals of marking entire towns, maximizing our impact. When a community partner expresses an interest in a marking project, we can immediately say ‘yes’ and get started, instead of waiting to identify funding and order supplies.”

Since the start of the SNEP Network, Save The Bay’s Storm Drain Marking Program has marked storm drains throughout 12 communities in Southeast New England, including 11 in Rhode Island (Barrington, Cranston, East Greenwich, East Providence, Exeter, Jamestown, Narragansett, Providence, Smithfield, South Kingstown, Westerly), and one in Massachusetts (Seekonk). Volunteers apply storm drain markers with the message “Don’t Dump, Drains to Bay” to remind residents approaching a storm drain that anything—from household products to litter—dumped in a storm drain will end up in our natural resources.

Save The Bay’s storm drain markers with the message “Don’t Dump, Drains to Bay”.

Currently, Save The Bay is working to complete all of the storm drain markings for Seekonk, MA. Volunteers will also conduct storm drain marking in Middletown, RI as part of the comprehensive effort of the SNEP Network Pilot Project to improve water quality in the Maidford River.  Additionally, volunteers will mark storm drains at another site located in Providence/North Providence that drains into the Woonasquatucket River and is a high priority for the Rhode Island Department of Transportation.

To sign up to volunteer for the active storm drain projects, visit Save The Bay’s volunteer page at: https://volunteer.savebay.org/storm-drain-marking/ 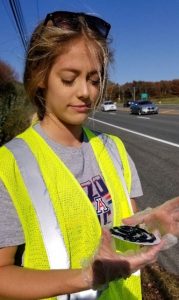 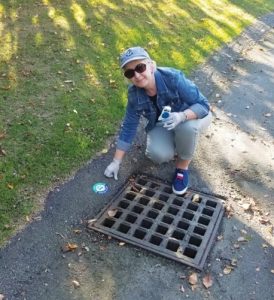 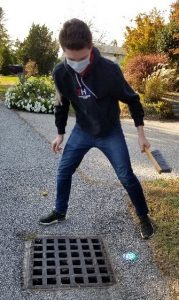 Volunteers put on gloves, brush away dust from the curve and apply epoxy to the back of the marker. The marker is placed on the curb next to the storm drain.